I Am The Bat

Low-Tech is the Best Tech

This Will Keep It Cool…Right?

Points for extreme use of the principle “more is better.” This looks
completely ineffectual, but I bet it makes people laugh when it’s all
spinning. Totally worth it.

The Power of Christ Compels You

Had to Have the Doors Widened to Get It Outside

A PC Case That Can Also Defend This Checkpoint

How About a Microwave That’s Really a Computer

My Other Girlfriend is a Computer

1.Platz: Overclocked Furniture
2.Platz: Low-Tech is the Best Tech
3.Platz: With the Power of Steam 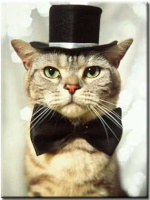 
This is Galactica Actual — Fire the Nukes!

Make Sure Everyone Knows What Your Favorite Game Is

Stare Longingly Into Kratos’ Eyes While You Disembowel Something

Hey Bender! It’s That Guy You Are!

And Leela Would Be Your Captain

This is Galactica Actual — Fire the Nukes!

New favorite. This case is modded in the style of the Battlestar
Galactica reboot that was on Sci-Fi Channel a few years ago, and was
awesome. That’s the starboard flight pod up there at the top of the
case. That’s where the ships come out! Oh man!

Make Sure Everyone Knows What Your Favorite Game Is

You want Half-Life branding all over your computer, right? Me too!

This is just cool-looking. I have no further comment.

Stare Longingly Into Kratos’ Eyes While You Disembowel Something

You can’t actually play God of War on your PC, but you can still be a huge God of War fanboy. With artistic talent.

Hey Bender! It’s That Guy You Are!

If it could smoke cigars, you would basically be living in “Futurama.”

And Leela Would Be Your Captain

I like “Futurama” as much as anybody, but damn, guys.

What is The Matrix?

For the Musically Inclined

Garbage for a Computer

The Game May Have Sucked, But…

TIE Fighter for a Table

Best When Calling for Air Support